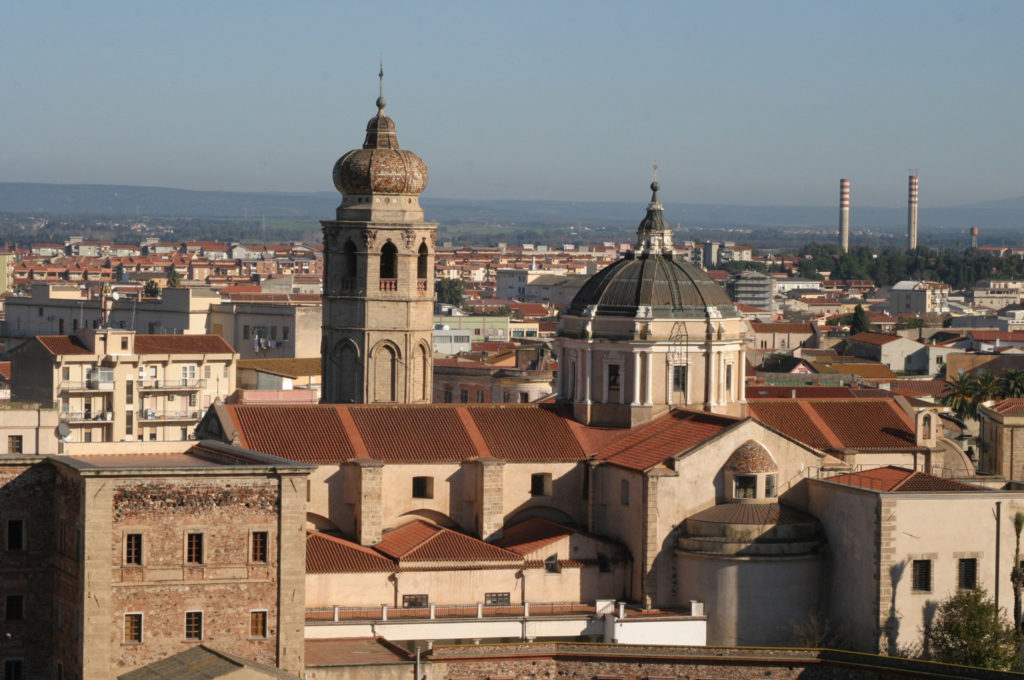 Oristano lies on the central-western coast of Sardinia, on a plain in front of the Gulf of the same name. Its “centro storico”, the old town centre, dates back to the 11th century, and is signposted by the hulking tower of San Cristoforo, also known as Porta Manna (the great gate).

The flat coast around Oristano has several wetlands of great environmental importance, rich in bird life. The largest is the laguna di Cabras, which in the summer becomes home to colonies of flamingos. This large town’s economy is based on the production of sweets and biscuits, fishing and fish farming, agriculture, pottery, wooden and wrought iron handicrafts and wine-growing. One of its most famous wines is Vernaccia, a golden dessert wine.

Oristano’s key event and attraction is its Carnival: on Sunday and Mardi Gras the town centre becomes the stage of a great costume pageant and display of horsemanship: the Sartiglia, a feast with parades and stunning horse competitions steeped in history and traditions. While taking in the charming timeless atmosphere of the town, step into the Antiquarium in the ancient Palazzo Parpaglia and browse through its interesting archaeological finds from the nearby ruins of the Phoenician-Punic city of Tharros. In keeping with its history, Oristano has plenty of charming churches: from the imposing Cathedral of Santa Maria Assunta, in the historic heart of town, to a rare example of Gothic architecture in Sardinia, the small church of Santa Chiara, hidden among the city’s alleys.

Sartiglia or Sartilla, as it is called by the locals, is an equestrian tournament organized in town of Oristano. It is a town and the province of same name located in the west of Italian island of Sardinia. Oristano has a population of approximately 30,000 people.

Oristano
The Sartiglia existed in Oristano before the mid 13th century. Nowadays it is held twice a year by the local Gremios or confraternities. On Carnival Sunday it is organized by the Gremio of farmers. The tournament on Mardi Gras (in French “Fat Tuesday”) is organized by the Gremio of carpenters. In the past the event included
only the nobility. Today it involves the whole community. 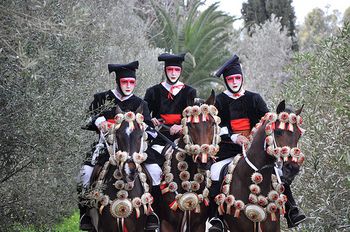 Costumed riders of Sartiglia
The Sartiglia on Carnival Sunday is held under the protection of Saint John the Baptist. And the one on Mardi Gras is protected by Saint Joseph. The Sartiglia is a combination of Pagan rites and Christian traditions. The event has its roots in ancient rites where people used to ask Gods for the abundance of crops. The word Sartiglia comes from Castillan word Sortija. Sortija is derived from Latin Sorticola which is a diminutive of Sors which means fate, fortune and ring.

The main character of the festival is Su Componidori or “King of Sartiglia”. He is chosen by the members of Gremio. Everything is done is secrecy. Their choice is announced at the Candlemas. 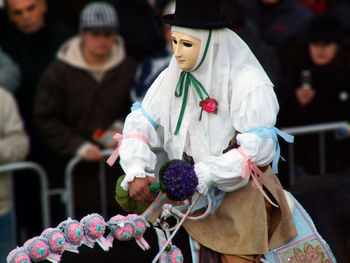 The person chosen must be strong, brave and pure. The purity is proven by the confession and Communion done on the day before the Sartiglia.

Su Componidori is neither man or woman, but a androgynous. Su Coponidori is dressed by local virgin girls called “Sas Massaieddas”. They are wearing traditional costumes. They are lead by so called “Sa Massaia Manna”.

The dressing is done in “S’Oberaju Majori’s” (the head of the Gremio) house on a sort of altar decorated with wheat and flowers. After dressing Su Componidori is not allowed to touch the ground as purity is needed to compete and win.

When finally ready Su Componidori rides out wearing a black hat, a mantilla, a lace decorated shirt, a vest and a leather belt. Su Componidori is kind of godlike creature that arrived among mortals to bring good luck and beat the evil spirits.

Su Componidori is given the little doll of May or “Sa Pippia ‘e maiu”. It is made of periwinkle flowers wrapped with green cloth. On top of it some violets are attached. They symbolize fertility and spring. 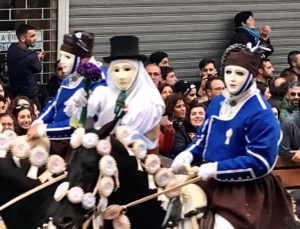 The procession then arrives at the track called “Sa Xea Manna” (which literally translates to “The Big Dinner”) where there is a star suspended. This tin star with the hole in its centre is one of key elements of the Sartiglia. The star is hanging from a ribbon strung across the track.

The “Su Cumpoidori” has to pass three times under the star. He crosses his sword with “Su Segundu”. The tune performed with a trumpet and drums signals the start of the event. Su Cumpoidori is the first who competes. His two vice “Capi Corsa” and numerous other riders follow. 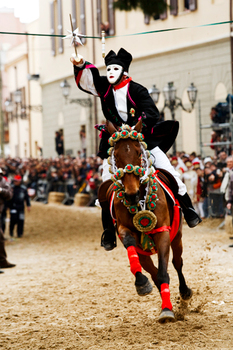 While riding at full speed across the track, the masked rider has to put his sword through the hole in star and take it away. It is important to make as many scores as possible. After each score the audience shouts “Su Cumpoidori”. Everyone is happy. Locals believe that more stars collected means more wealth in the year for farmers or carpenters.

Next in the Sartiglia Su Cumpoidori and his two vice “Capi Corsa” try to take the star with carved wooden stick or “Su Stoccu”.

After that there is one more duty for the Su Cumpoidori to perform. It is called “Sa Remada”. Su Cumpoidori gallops along the track lying on his back. This is the end of Sartiglia. 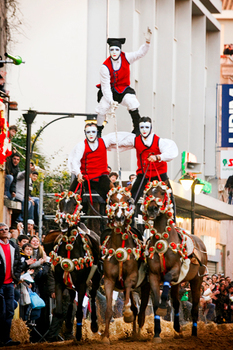 La Pariglia or “The Pyramid”

The event following is called La Pariglia or “The Pyramid”. It is held on another sand covered track in Oristano. It includes male and female riders wearing masks who perform all sorts of stunts. It is very spectacular. It ends at sunset.