The story of Is Arenas
Forest to desert to forest again… 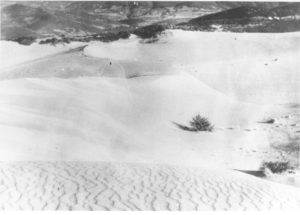 Up until the 1700s, Is Arenas was a great Juniper and Holly Oak (Lecci) forest typical in the Mediterranean. From the early eighteenth century the area was used for a significant pasture of sheep and was subjected to considerable tree cutting; all this resulted in deforestation of the territory, giving rise to a desert of more than 3,000 hectares, the only desert in Italy. During this time, the wind shifted the sand, forming dunes of 50 m in height; These dunes have often blocked the traffic on a nearby state road and damaged the nearby cultivation of olive trees and fine grapes. 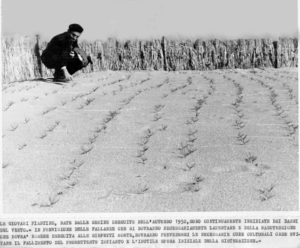 The beginning of a new forest…

The entire area remained a desert until the early 1950s, until a few years after the end of World War II. In the 1950s, the planting of a pine forest started, with investment from the Marshall Plan, funded mainly by the United States, to help areas most affected by the consequences of the World War, especially in areas of high unemployment. In this work, which had the purpose of protecting the sand dunes and safeguarding the land behind, approximately 1,500 workers labored for 10 years, planting over 5,000,000 Pine trees (Pinus Pinea). The Pine tree seedlings were protected by small artificial hedges and of Acacia saligna, which resisted winds and high summer temperatures, functioning to stabilize the soil and protect the pines in the early growth stage.

When I arrived at Is Arenas, in the second half of the 1970s, the forest was almost impenetrable and consisted of young, very small plants, a few inches apart, slender and filiform, with a height up to a maximum of 4/5 meters. The pine trees had been densely planted to withstand the wind and were struggling to survive; We immediately launched a large and ambitious forest management plan. Over the past four decades, working with the local community and forestry authorities, we have carefully managed the territory and cultivated the forest to achieve the high quality level and the panorama visible today.

40 years ago the Is Arenas forest consisted of only pine and acacia trees – weed essence – with the program of cleansing and thinning, we stimulated and accelerated the natural diversification of vegetation that occurs in a forest environment; We have enriching the native sandy soil with nutrients by deposited and dispersing the shredded residue of the plant cuttings. The cutting of Pine and Acacia trees has developed a layer of humus that has finally been able to support more species and varieties of vegetation including Cyst, Lentil and Juniper. This important layer of humus, which did not exist before our interventions, was crucial in the nutritional cycle and contributed to retaining the natural moisture; Through these vegetation evolutions, the high pH values ​​of the soil are being reduced. At present Is Arenas Forest is a complex network of systems, under constant and careful management aimed at restoring the historical natural conditions, which existed prior to deforestation.

Particularly important is the evolution of the Pine forest towards a jungle forest with contextual improvement of the landscape. 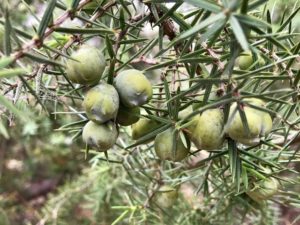 Until the late 1970s, Junipers practically did not exist at Is Arenas. Following the forestry interventions described above, small Junipers began to reappear mainly in areas of Is Arenas without Pines and therefore, not in the shade. The success of such native Juniper resurgance can be attributed to the humus layer that we have developed through the forestry interventions of the first 10 years, and above all, the indigenous foxes acting as important agents in the propagation process. The fox eats Juniper berries that help there digestive system. After digestion of Juniper berries, the seeds are expelled in the large area frequented by foxes. For this reason, Is Arenas for many years was forbidden to hunt foxes. In return, the foxes have been able to spread the native Junipers into the forest. Today we can estimate there are – between large and small – more than 400,000 juniper plants in the Is Arenas pine forest. So the fox was an important agent in Is Arenas’ forestry evolution. 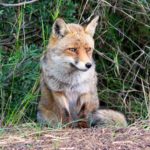 At present, and after 40 years of thinning intervention already accomplished, there are stil over 500,000 pine trees in the property. Further thinning is still needed to allow the Pines to fully develop and to favor both the germination and development of plants in the same family as well as evolution towards other species. Recently, following extensive studies and evaluations by forest experts, accompanied by specific environmental assessments for flora and fauna, a program has been put in place for eight years to further reduce the population of pines planted in the 1950s. And will complete their life cycle (120-150 years) towards the end of this century. The operation also has positive effects in terms of energy and the environment, as the plants that are cut down – which are the least promising – are being used to produce renewable bio-mass electricity, reducing emissions in the environment by replacing petroleum or coal products. The reduction of the Pines originally planted will also favor the development of indigenous vegetation, which will help the Pine forest, developing plants of different ages with successive cycles of life according to the diagram below:

The forest will continue to evolve and in the future it will be different from today, dominantly composed of Junipers. The junipers will produce additional non-acid humus in the soil and therefore will further reduce the pH of the soil and this will facilitate the return of precious and classical Mediterranean plants in the landscape of Sardinia, even through artificial replanting.

In conclusion, due to the careful planning – supported by the tourist intervention that occupies a small part of the territory – and a consistent and careful management – and with the collaboration of indigenous foxes – Is Arenas will still be occupied by a forest of Junipers and Holly Oaks as it was 300 years ago. 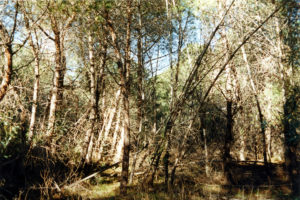 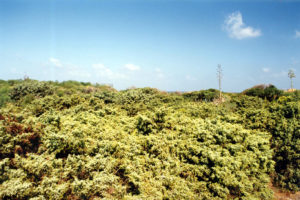 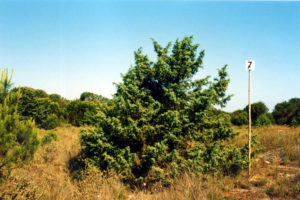 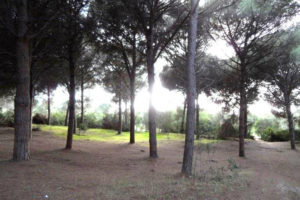 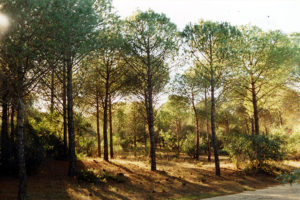 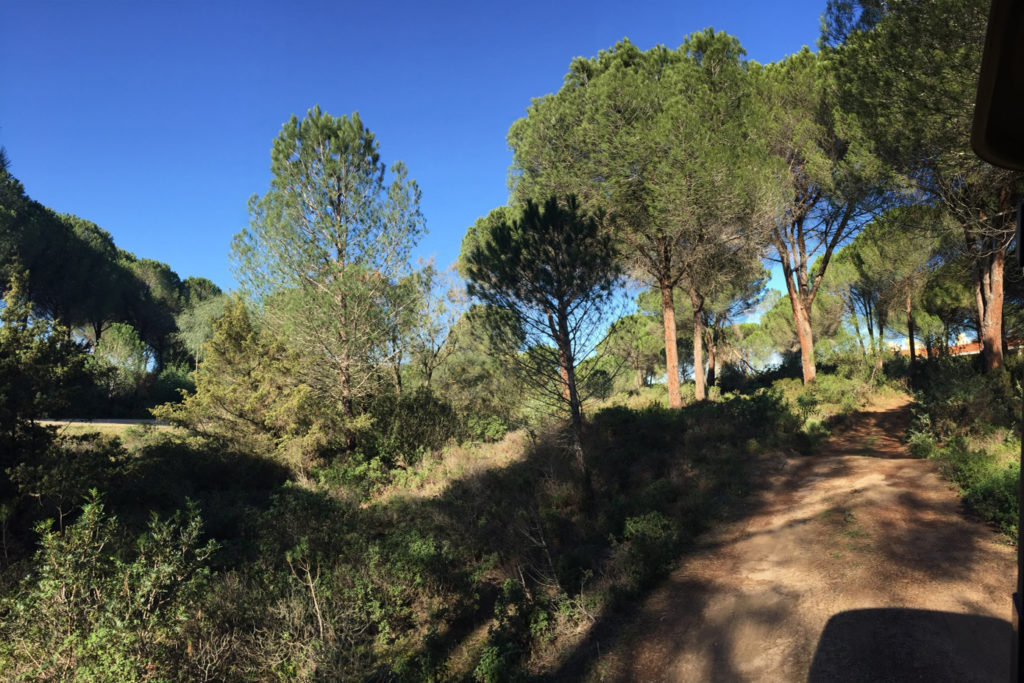 The evolution of the pines to juniper. 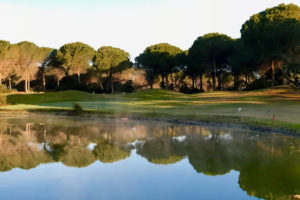 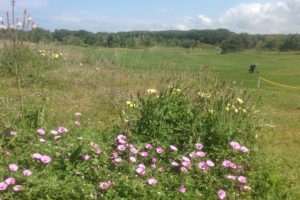 From the beginning of my association with Is Arenas, more than 40 years now, I have been resolute in protecting and preserving the natural ecosystem. On such a substantial and important property, this is a mission which involves many complexities; both political and technical. 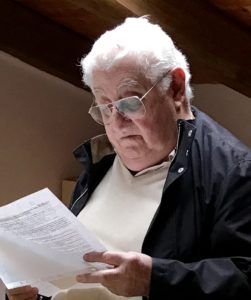 When I first arrived to Is Arenas, there wasn’t any infrastructure (roads, energy, access, water, fire protection, etc.)  It was immediately apparent to me, we need a coprotection to this very important and sensitive landscape.  Our first efforts included a road system to provide access to all the property.  We developed a comprehensive and critically important fire protection system, and a complex network of access roads throughout the property.  Our early efforts included arranging for energy to be delivered to the property.  We have spent 40 years planning, working and investing to protect and enhance Is Arenas.  Today, everyone can enjoy this wonderful landscape.

Each day we work hard to provide our customers, guests and friends with the best possible experience.  Whether you come to Is Arenas to enjoy the forest, the beach the golf or just to relax and absorb the splendid nature and richness of the Sinis peninsula, we hope your experience will be truly memorable.

Is Arenas is a special place, with a storied past. But, each day is important and Is Arenas’ future is also our constant focus.  The future is bright.

I invite you to visit and experience Sardinia, the Sinis peninsula and particularly Is Arenas.